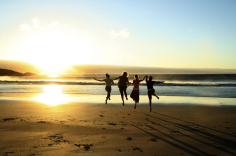 Her early work was in helping empower survivors of  sexual assault and domestic violence.  After a move to New York in 2002, she turned towards addictions and developed her skills in motivational interviewing, guided imagery and "acudetox" a 10 point acupuncture protocol to alleviate post acute withdrawal symptoms.

Since 2005, she has lived in Jacksonville, has worked in inpatient and outpatient settings and in schools with a special interest in families and children.  She has also worked extensively with adolescents, women impacted by abusive relationships, couples, and the military population.

She has presented on Social and Emotional Development, Motivational Interviewing, Mindfulness, Self-Care, Parenting and Adolescents and Stress.  She also created a farming retreat for teens (3D Life) to address some of the gaps in coping strategies she has noted in her work.

She has been in private practice since 2013 and enjoys painting, writing, reading, traveling, yoga, being outside and enjoying time with her 2 daughters.